Last week I was contracted to shoot the cleanup of the Keauhou Bay area. 1 year ago the Keauhou Bay was hit by the Tsunami that was generated after the devastating earth quake in Japan. Several businesses in the harbor area were wiped out from the waves that hit the harbor on March 11, 2011. Sea Paradise scuba diving company's building was severely damaged by the tsunami. The build had to be torned down and Fairwinds building had to be renovated too.

Tires attached to the sides of the concrete piers were ripped from their spots and submerged into the bay to act as the newest reefs. 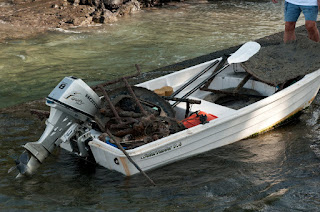 The community turned out in force to help with the clean-up. Volunteers painted, hacked down brush and even put on their scuba gear to retrieve the trash that littered the floor of the bay.

The bay is much cleaner now that the fantastic turnout of young and old worked hard to bring the bay back to it's old clean self.
Posted by Kirk Shorte Photography at 1:50 AM